This was an experiment to see if I could potentially create and direct a show. With the help of my actors we created the half hour show of Imaginary which was based off the premise of “what happens when you abandon your imaginary friend?” 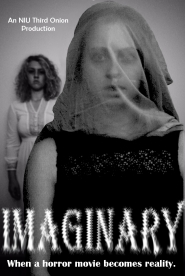 With the help of many we created this horror theatrical piece during the month of October and encouraged the audience to dress up in costumes.

While working on my original theatrical piece Imaginary I can look back and say that I would not have been able to pull it off on my own. My actors took the project seriously. When asked to improv a scene they would and it would produce material that would later be used in the final script. If something didn’t make sense we would work together to make sure we had a cohesive story. Without my team, my show Imaginary would have stayed a small fraction of an idea in my subconscious. They proved that my life experiences might be relatable to many; but a groups experiences is relatable by all.

My class at NIU had the privileged to study abroad at MXAT in Moscow, Russia for an entire semester. My class is very engaged with movement so when we heard that we were to re-create the Lion King using what we had learned in Droznin everyone jumped into high gear.

With the video below you can see short clips of my participation with the piece (wearing the dark green shirt). I sang in I Just Can’t Wait To Be King, was a goofy hyena in Be Prepared, and played Simba in (and choreogrpahed) Stampede.

This all-female cast worked together to devise a piece of theater which encompassed the journey of a journalist who was has been beaten and thrown into prison. While she is clinging to her own life she is visited by several women who have left their mark on history.

As a cast we researched women throughout history and tried to focus on the ones that haven’t received as much recognition. We also created the text of the script from primary sources including writings that date back to the 10th century. Together we created a script with stories that ranged from the holocaust, sex-trafficking, to even beautiful poetry. Complimented with very physical movements.

The women I represented were Christine De Pizan and Susana Trimarco.

My favorite was Susana Trimarco who is a human rights sex-trafficking activist who has helped thousands of women escape from slavery. She became an activist after her daughter was kidnapped at the age of 23 by sex- traffickers. I thought this woman’s story was so incredible and so powerful that I insisted she be in the show.

When the scene with Trimarco was created I had the urge to have every other actress to be covered with their scarf. The reason why I wanted everyone’s face to be covered is because I believe women sold into slavery lose all sense of identity. Can you imagine trying to look for your daughter when she no longer has an identity of her own? You keep looking at these hidden faces, hoping that one will reveal your daughter, but it’s another lost daughter, mother, or sister that equally needs your help. You are a savior to thousands of women and yet feel like you failed the one you want to save the most. As a performer I am focusing on actuality, reality, genuine response, and thinking “What is it really like?” Although I have been in several other original/devised shows this show is one that will always follow me.